Right. So Charlie Austin is a QPR player once again and I’m smiling. I feel elated to the extent of which I immediately went to the QPR site and ordered a new Rangers shirt with ‘Austin 45’ on the back. I already have a shirt for this year but it has ‘Smyth 38’ on the back and the last shirt I bought before that had ‘Washington 9’ on it and the less said about those the better… This one I couldn’t get wrong. We love Charlie. He’s good news. He represents the good times. There have been rather few good times in recent years but when they’ve been good, oh have they been good. I remember when Charlie scored his brace to take QPR to the play off final 7 years ago and thinking, damn, this might be it, this might be the happiest I’ll ever feel in my life, oh well. Bare in mind I was 12 at the time so my spectrum of emotion was rather limited to football, The Simpsons and whether or not I got a gold star for my Numeracy homework. Oh life, the simplicity of childhood etc. etc. 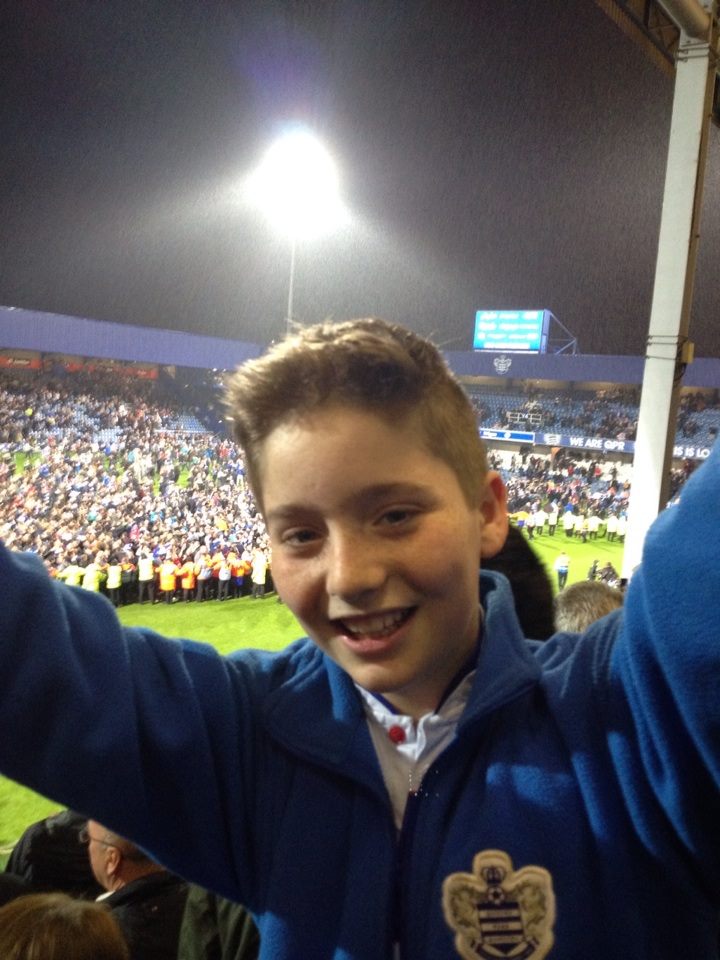 ← Genuinely me post play off semi-final. Note the ultra stylish QPR fleece on top of that season’s home kit. If anything Charlie being at the club provides 15000x the income to the club store as it does without him, mainly through my purchase of literally anything with a QPR badge on it. The four QPR garden gnomes outside my house prove my point.

For me that’s what brought back so much joy with the Austin news. To return to the past. To see life pre-COVID, pre-Conor Washington, pre-2020. To have a glimpse at what life was like before the inherent confusion of the teenage years, to return to the days when our club was considered, how do they say, ‘not bad at football’. So much nostalgia awoke with Charlie’s return. People can be realistic and talk about Charlie’s age and his recent form and how he probably won’t be what he once was, but for me it’s truly not about that. This season drained me of so much ambition and positivity to the point that I’d actually felt like not even watching us play at times. I’m sure that comes part and parcel with supporting QPR but as a young fan now at just 19, that feeling of hopelessness was foreign to me. Anyway, the fact is, there has been a lot wrong with us this season and it has done away with whatever ambition I had left for this particular squad.

Therefore, what we needed was simply an injection of some good. A vaccination for the pandemic in the squad of heads lowered syndrome. I don’t know what it’s actually like in the dressing room right now but for us fans in our own dressing rooms, AKA our bedrooms, bathrooms and wardrobes (when the lockdown is REALLY getting harsh), the mood has been rather sombre. Actually not only has it been sombre but it’s been incredibly frustrating and at times even contentious and hostile. So, when things are up in the air, being debated, contended amongst R’s fans, the unity starts to boil away and the ties keeping us together start to evaporate. As a fanbase, we are fundamentally united by that one everlasting bond which is quite simply unity. We are united as one through a shared support for a rubbish football club from West London.

In the face of disagreement, we needed an antidote, something to bring us together again. As a QPR fan I know for a fact that there is one thing, amongst it all, that all of us agree upon and that is of course the utter quality of Charlie Austin. Charlie scored for fun in his prime. Charlie scored 18 goals, and got 7 assists in a season where QPR held the record, up til this season (Cheers Chris Wilder!), for the longest run without a win. We were awful and yet Charlie Austin managed 25 goal contributions. Unbelievable. He was at the front and centre of the play off winning season, scoring pretty much at least every other game to keep us amongst the top and eventually played his part in getting that R’s side into the Premiership. Charlie brought a troubled side together and this season he’s returned to bring a divided fan base back together. America could use a Charlie Austin right now.

The responses to Charlie’s return, bar a few pessimistic buzz kills (though they’re probably right, but like it’s Charlie, just be happy for a bit), were unanimously joyous. The goal compilations, the images of him banging them in back in the old days, the calls for Harry and the boys to make their way back to W12 too were just beautiful. Social media is a shitty place generally, especially football social media. So it was just lovely to be reminded why we all follow each other, why we all share the same subject matter for our tweets, why we all bleed the same colours. This season was in desperate need of something to sing about and Charlie, Charlie, Charlie Austin back in the hoops has certainly played his part in bringing that to QPR.

However well he plays, whether he absorbs the poor form of our current strikers or scores a hattrick a game, I am just so happy to have this man back at QPR. He reminded me why I never miss a game, why I wear the hoops, why this year isn’t going to be as bad as the last. Welcome back Charlie and thank you to the club for helping us find some happiness in this happy-less time. Maybe this season will pick up, maybe we will start fighting again, maybe, just maybe, we will win a game at some point. Who knows? It’s QPR. No one ever knows. Anyway, love you Charlie, cheers for saving the season, even if only in spirit. Come on you R’s!